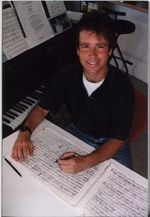 Russell received a Ph.D. in Music from Harvard University, an M.M. from the New England Conservatory, and a B.A. from UCLA. He studied composition most notably with Leon Kirchner, Arthur Berger, Elaine Barkin, and Kenneth Klauss. His works include solo, chamber, orchestral and film music, and have been performed worldwide. He conducts the Los Angeles Youth Orchestra and performs himself on piano and classical guitar.

Steinberg is Artistic Director of the Los Angeles Youth Orchestra, a group that includes students from over 60 schools in the LA area and performs at the Colburn School in downtown Los Angeles. A recent Lecturer on the UCLA Faculty, Steinberg is also a popular speaker for pre-concert events with the Los Angeles Philharmonic and the New West Symphony. Steinberg is the creator of AudioMaps®, an innovative approach to music listening intended for beginners as well as connoisseurs. His books AudioMaps® To The Beethoven Symphonies, vol. 1 and 2 were published in 2008 and 2009 respectively. Available recordings of Steinberg’s music include Stories From My Favorite Planet, produced by the Daniel Pearl Foundation and performed by violinist Mitchell Newman, Flute Sonata recorded by Michelle Stanley and produced by Centaur Records, and Desert Stars, a recording of Steinberg’s music for piano and classical guitar, performed by the composer. 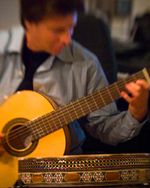 Selection from Russell Steinberg's Sacred Transitions http://www.bostoncourt.com/events/220/red-hen-press Los Angeles, CA (June 6, 2014)—The American Composers Forum of Los Angeles (ACF-LA) announces the winners of its 2014 Composition Competition. In alphabetical order they are Mark Abel, Kevin Kelly, Leslie LaBarre, Jeffery Parola, and Russell Steinberg. Their contest entries for voice and piano are scheduled to be performed at Boston Court Performing Arts Center on Tuesday evening, July 15 (time TBA). In addition, Red Hen Press will present poetry readings on the program. The performance is free and open to the public (donations are welcomed). For membership to ACF and other information on the presenting organizations, visit the websites of the American Composers Forum, Red Hen Press, and Boston Court.